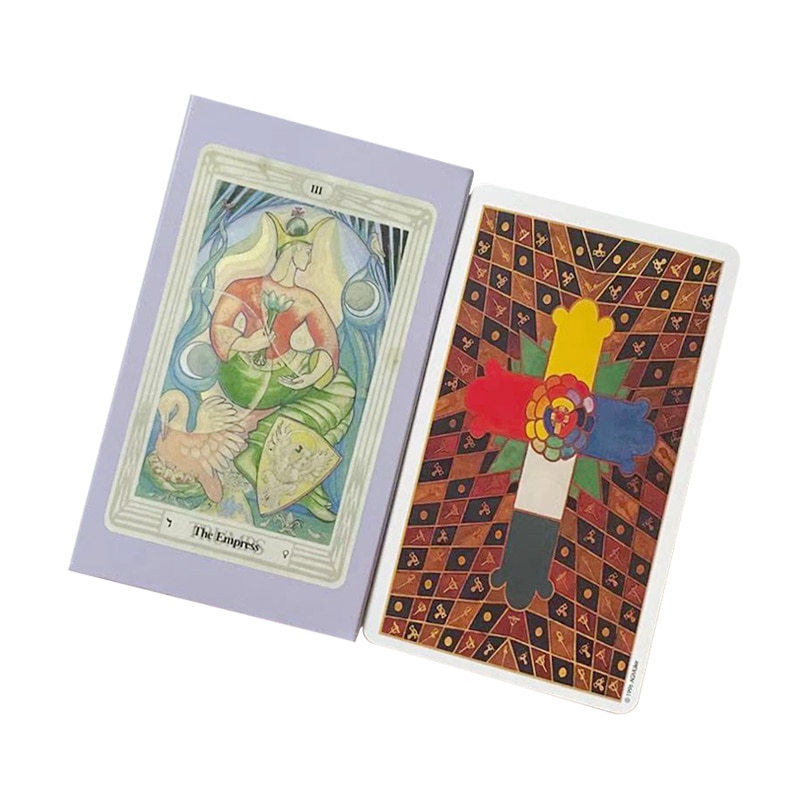 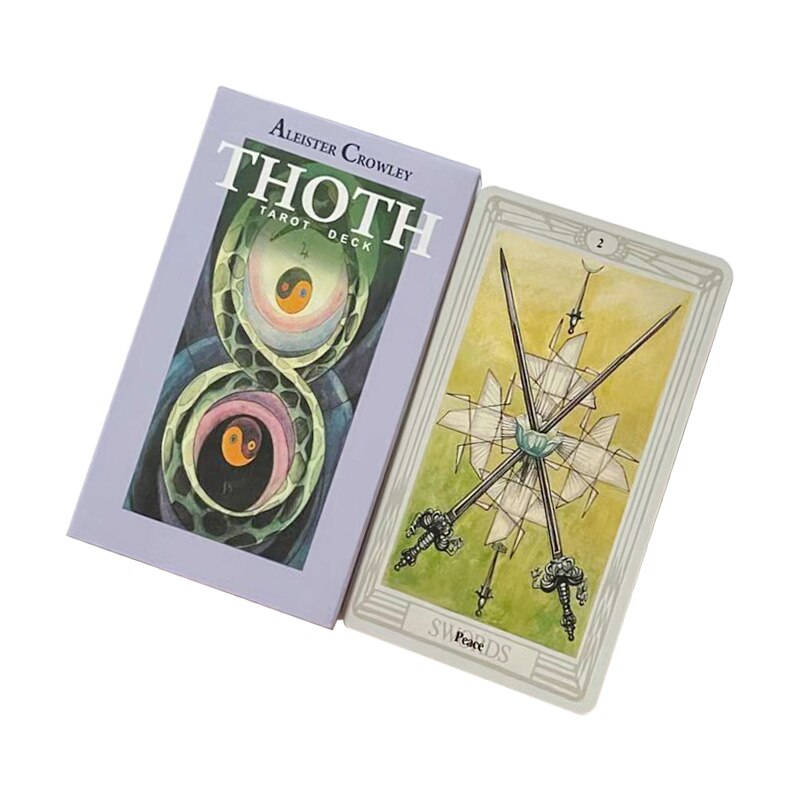 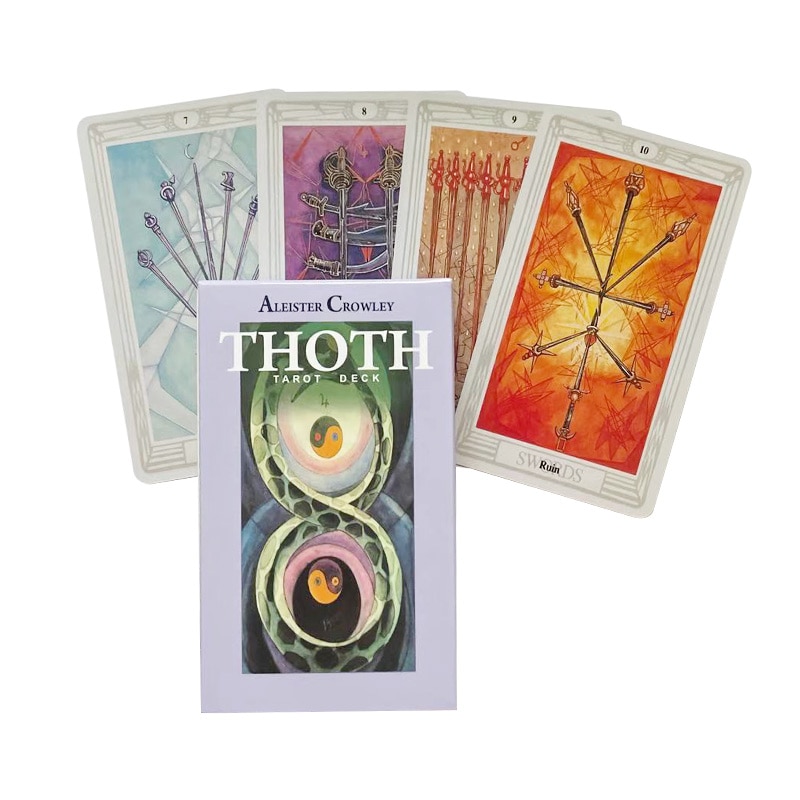 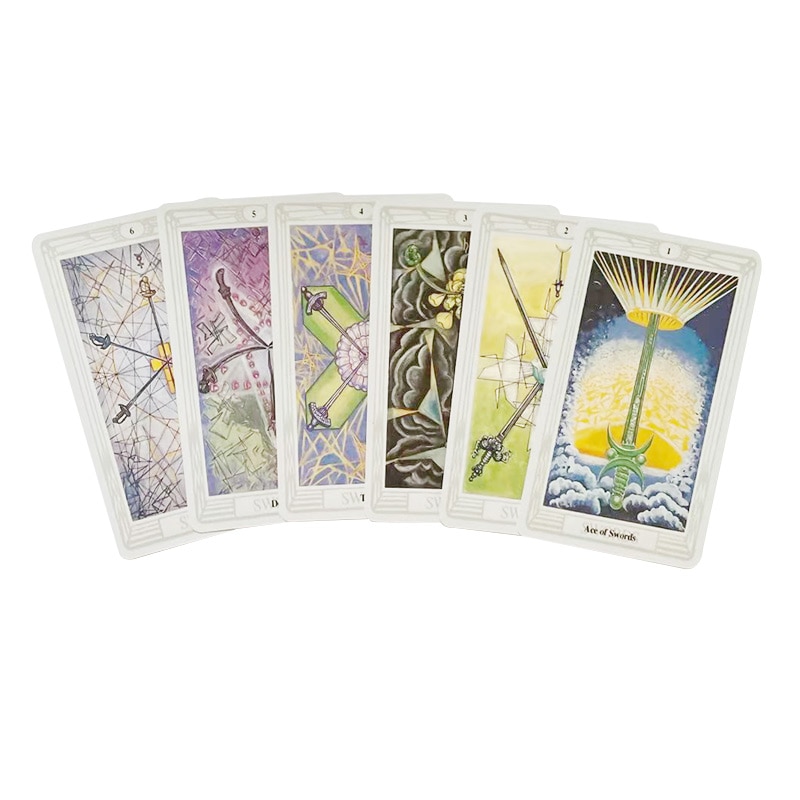 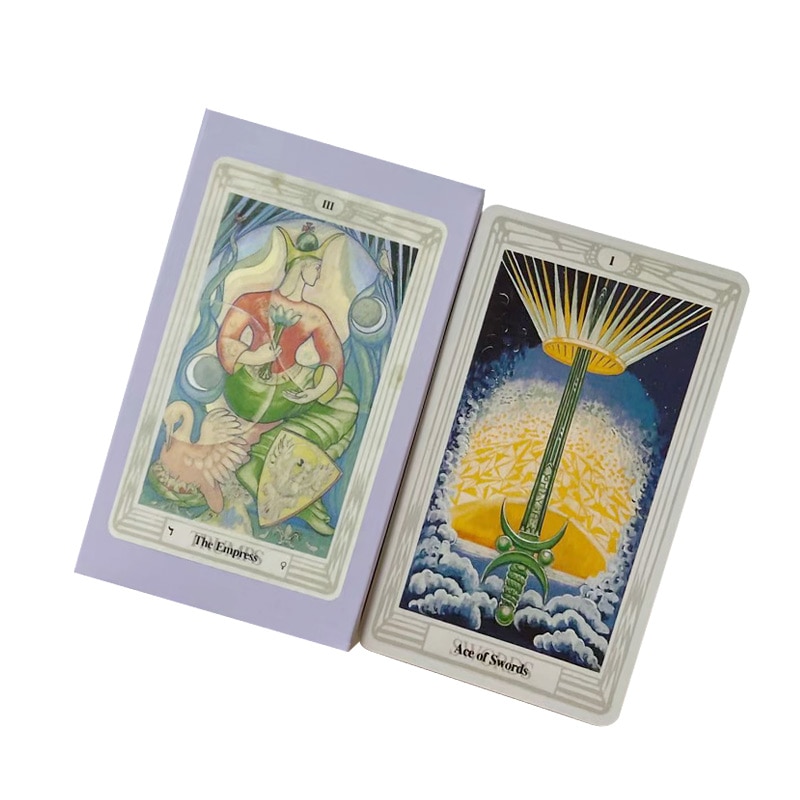 With so many tarot decks out there, it’s hard to decide which one to get. Well if you are in that situation right now, let us show you a really unique one. It’s one of the most popular tarot decks worldwide, and it is included in almost every list of best tarot card decks (INTERLINK GOES HERE).

What is Thoth Tarot Deck and who made it?

Thoth Tarot Deck was a project by Aleister Crowley in 1938. His first idea was to simply update an existing traditional tarot deck to new symbols. However, the project gained a lot of interest and it took them 5 years to finally complete it, so the deck was released in 1943.

Firstly, who is Aleister Crowley, and what he has to do with tarot?

Aleister Crowley was once named “the wickedest man in the world” because of his controversial life. He was an occultist, ceremonial magician, and even founded a religion named Thelema. Aleister wrote books throughout his whole life.

So, how did Aleister got into the tarot?

Since he was into occultism and magick, tarot cards were natural to him because a lot of people in those circles use them. Aleister decided that he would design one of his own, and that’s when Thoth Tarot Card Deck was made.

Lady Frieda Harris painted the deck by instructions from Aleister Crowley. She had 60 years back then, but that didn’t stop her from making one of the most iconic decks to this day.

Thoth Tarot Card Deck follows the Tarot of Marseille pattern. Almost every tarot deck released during or after the 19th century follows this pattern. Such decks consist of 56 cards divided into four card suits (Batons, Swords, Cups, and Coins) and 22 trump cards (atouts).

Thoth Tarot card deck is one of the most used tarot decks around the world. Aleister Crowley also wrote The Book of Thoth which explains how to use this deck and the meaning of each card.  We suggest you get this book as it will help you a lot with the interpretation.

A lot of people have negative thoughts about tarot, most likely because they think of it as something evil. Since Aleister was an occultist, that doesn’t help with the perception either. However, Tarot is not evil, but people still perceive it as something bad. We hope our articles will help with a better understanding of tarot and how useful it can be.

The deck was started in 1938, but the design looks modern as if it was made a few years ago. Both Aleister and Lady Frieda had died before Ordo Templi Orientis had published the deck in 1969. His initial idea was to update the traditional symbolism used in tarot cards.

Aleister then decided to invest more time into this project, which led to 5 years of development. Symbols used in Thoth Tarot Card Deck are based on different disciplines such as philosophy and science. You may also notice a lot of occult symbols present in this tarot deck.

Aleister explained all the symbols in The Book of Thoth. As previously mentioned, this deck follows the Tarot of Marseille pattern. In this pattern, major arcana cards have roman numbers written on the top, while minor arcana mostly didn’t have any. Aleister added Arabic numbers on minor arcana cards as some other artists have done.

Also, you may see the name of the card at the bottom part of it. Some of you may have noticed that Aleister had changed the traditional court card names. To avoid confusion take a look at the changes:

Thoth Tarot Card Deck is ideal for people who are in love with mystery and occultism.

Name Thoth comes from the Egyptian God who was a time measurer, invented magic, and he could predict the future. One of the inspirations for this deck also came from the Golden Dawn tradition. For those of you who don’t know, Golden Dawn was a secret society that was studying and practicing occultism, metaphysics, and more.

Court claimed that the first Major Arcana cards were made by an Egyptian priest who had converted the Egyptian “Book of Thoth” into illustrations. The first time Court has seen a tarot deck, he instantly claimed that it held the secrets of the Egyptians.

Although they are interesting, Court de Gebelin never had any historical evidence for his claims.

You may notice that this book has the same name as the one Aleister has written, but the “Egyptian” Book of Thoth is a name for a lot of different ancient Egyptian texts that were supposedly written by Thoth.

Some cards in this deck clearly use Egyptian symbols such as The Tower Thoth card. On the top, you can see the Eye of Horus who’s an Egyptian God of perception. Eye of Horus portraits the state of being spiritually awake.

What are the symbols on Thoth tarot cards?

Many of the cards in this deck have Egyptian symbols. Aleister explained these symbols and the origin of tarot in the book we’ve previously mentioned. However, if it’s the first time you have seen such symbols, the book might be a bit complex for you.

Fear not, there is a solution. Lon Milo DuQuette, a famous occultist and a writer, had published a book called “Understanding Aleister Crowley’s Thoth Tarot“. This book gained so much popularity that he even made a new edition of it.

For those of you just starting out, we suggest going through this book first. It’s ‘beginner friendly’ and you’ll get to understand the whole history behind the Thoth Tarot Card Deck. Lon Milo also goes through Aleister’s history and explains his roots and involvement with occultism and tarot.

There is so much to learn that you’ll quickly see how rich Aleister’s spiritual route was. Everyone that feels a connection towards tarot should read this. It’s not a surprise that his deck went out to be one of, if not the most popular tarot deck out there.

This deck is full of hidden knowledge and symbols. If you are a person who wants to expand his knowledge about tarot, occultism, and ancient Egyptian symbols, this deck is for you. It may not be a tarot deck that’s simple to understand, but you’ll learn much more about tarot.

The sole fact that there are two books explaining the meaning of this tarot deck is crazy. You can see based on how complex and full of hidden symbols it is. Aleister Crowley was a strange man indeed, but he had a rich knowledge of occultism.

There are no reviews yet.

Be the first to review “Thoth Tarot Deck” Cancel reply