From the beloved artist-seeker behind The Wild Unknown comes the New York Times bestselling tarot deck and E-guidebook-together for the first time in a beautifully designed package.
For a legion of contemporary seekers, The Wild Unknown is more than a tarot deck; it’s become a resonant guide for people all over the world, inspiring them to share countless images of their readings, tattoos, and art prints from the deck.
Each of the seventy-eight cards in The Wild Unknown tarot deck is a work of art that explores the mysteries of the natural world and the animal kingdom. Hand drawn in her spare, minimalistic style, the striking images invite deep contemplation. The Wild Unknown guidebook is also an extraordinary cult art object-a hand-lettered and fully illustrated primer that leads readers through shuffling and cutting the tarot, creating spreads, and interpretations of all seventy-eight individual cards.
Now, for the first time, The Wild Unknown tarot deck and tarot guidebook are available together in one beautiful, high-quality keepsake box set. Newly designed and including never-before-published material, this boxed set retains the mystery, glamour, and allure that made her original deck a cult sensation, while introducing a whole new audience to its magic. 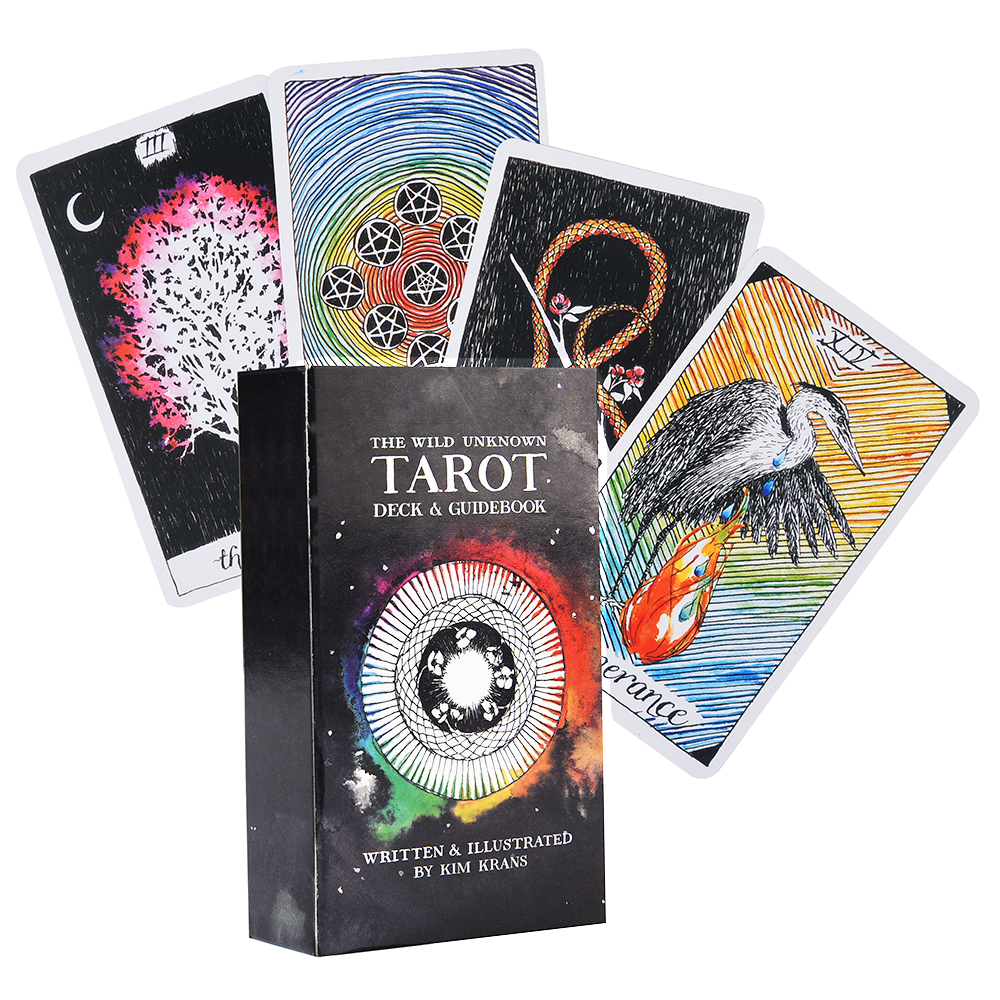 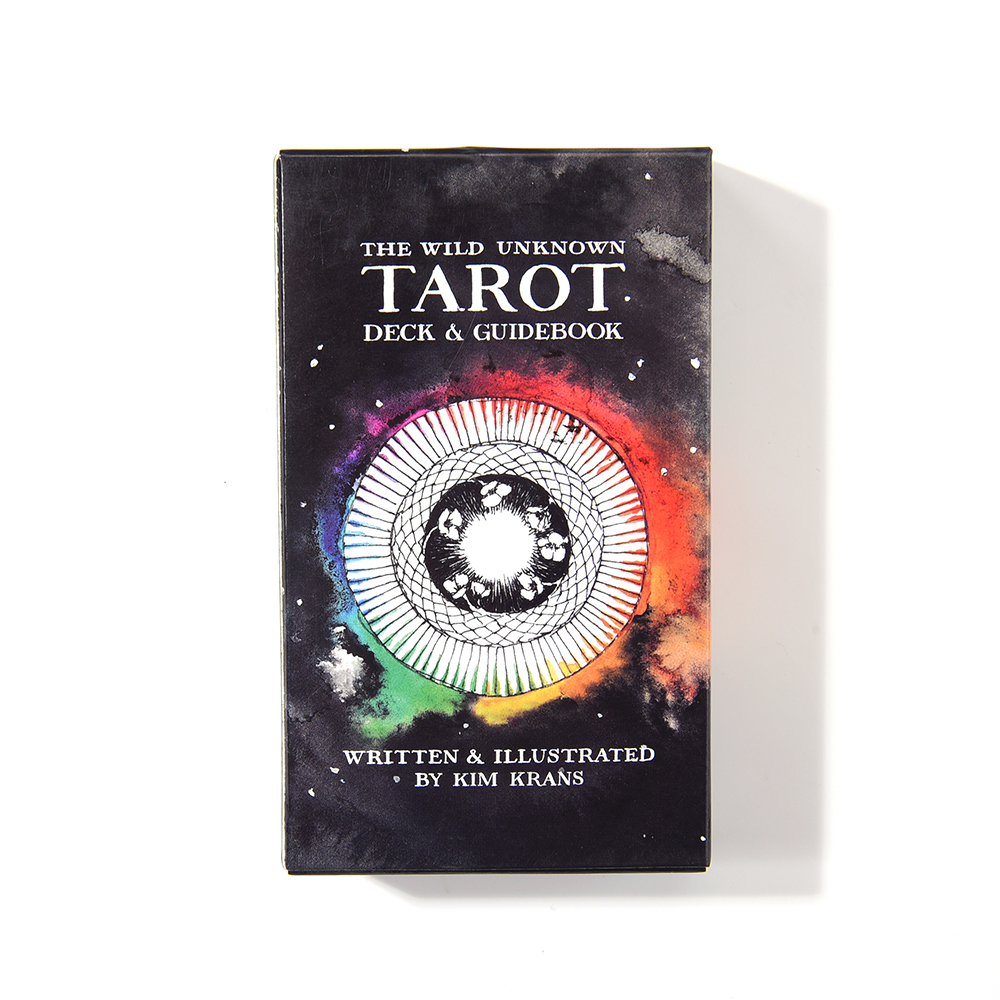 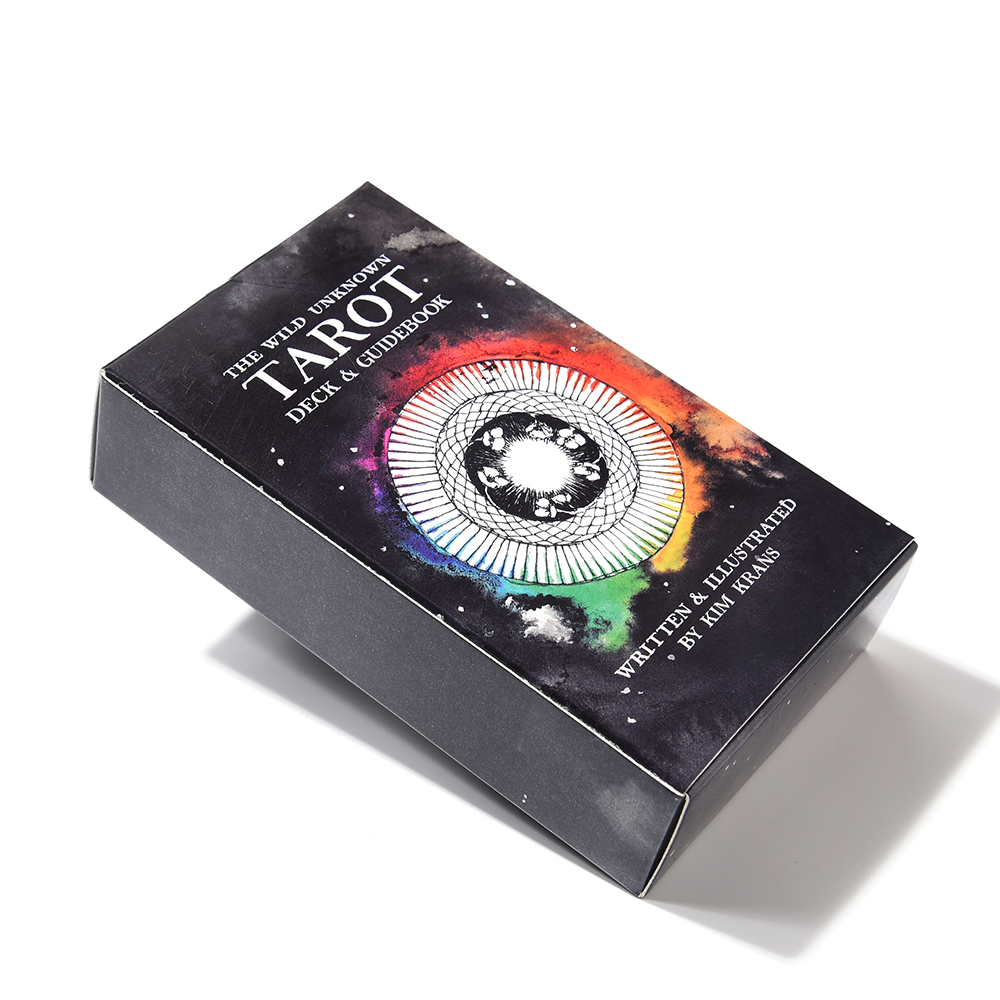 Do you ever wonder what a bestselling tarot deck looks like? We are about to show you.

There is no big publishing name behind it. The Wild Unknown Tarot Decks are loved by many because they are beautiful. Kim Krans is the person responsible for this magnificent deck. She designed all of the images in this tarot deck.

Just like any other tarot deck, it has 78 tarot cards in the deck. There are 56 Minor Arcana cards and 22 Major Arcana cards included into this deck.

Firstly published in 2012, The Wild Unknown Tarot Deck are one of the most sold tarot decks in the world. It is inspired by different wild animals and nature, hence the name. This is my personal favorite deck and I always return to it.

Each illustration is hand-drawn with black and white motives, but also a spark of color here and there. You’ll instantly feel the magic once you see those beautifully drawn images. The cards in this deck have a matte finish to them and the box packaging is amazingly beautiful as well.

The Wild Unknown Tarot deck is a Marseille-based tarot deck as the Thoth Tarot card deck. Shuffling this deck feels a bit different than what we are used to. The cards are made out of quality thick cardstock so it may take some time to get used to them. Because of this material, the deck feels premium compared to some massively sold tarot decks.

We are just amazed by the number of details each card has. Take for example the illustration of the “Death” card as you may see above. Each line feels so sharp and the illustrations seem as they have a “soul” in them.

What I love about this deck is how it doesn’t add some kind of fake mystery to it. We’ve seen some decks lately that try to grab your attention with provocative and mysterious pictures. The Wild Unknown Tarot Decks are as raw as it gets. It is really hard to explain it, but these cards have a calming effect when you look at them.

As we all know, all tarot cards have a different meaning. It’s not any different with this deck either.

We’ll go through some of the most important cards such as ‘The Fool’, ‘The Lovers’ or ‘Wheel of Fortune’. Even though the box states there are no right or wrong in interpretation, We’ll give you our look at it.

Some say it is THE most important card in any tarot deck. Kim has decided to put a baby chick as a symbol of the fool. You can notice it has one foot in front as if is going to take a step.

This symbolizes a leap of faith. The fool is usually a representative of innocence and naivety. As you can see, the bird is really young and not ready to fly yet, but it’s eager to try.

We all have to start from somewhere. Mistakes can, but don’t have to be a bad thing. If you look at them as an opportunity to grow, they are actually quite helpful.

In order to grow as a person, we have to try. You can also notice the orange and yellow lines in the background. The lines resemble the sun and the darker portion at the bottom of the card symbolizes the unknown that this birdie will walk into.

“The Fool is ready to fly. His young wings ache for flight, and with a single step he leaves behind the comfort of the nest to begin the journey through the Major Arcana.” – Kim Krans

Ah, the lovers. One word that would perfectly explain this card is harmony.

You can notice how the geese fly in parallel wingspans. Their whole body including the neck is positioned exactly the same. That’s an awesomely creative way to paint harmony, flow, and ease.

Almost every tarot deck has lovers facing each other, not this one though. You can see two geese flying together in the same direction, but each in its own path. This symbolizes the love union as it should be.

Both lovers know that they have to get their own work done first, however, they will also work together towards obstacles. It’s interesting to see how Kim decided to “change” the card compared to other decks. Although, when you think about it, lovers are supposed to be partners in every way so this perspective actually makes more sense.

You could also notice the rainbow rays in the background, and the rainbow symbolizes hope and faith. Geese are flying through life together. It’s always easier to accomplish greater things together, than as an individual.

In general, the lovers’ card symbolizes love, sexual desires, connections, and different unions. However, this card also portraits the development of personal values and the desire to follow our beliefs. Only by following our beliefs, we can create our own identity.

What if you draw this card in reading?

This card also looks quite different than any other tarot card out there. Many of them have a sphinx, serpent, and the devil. Creatures can be different, but almost every single one has a wheel in the middle and creatures around it.

You can see in the image below that even though this one has some kind of a wheel, it simply looks different. There is an owl at the top with the moon and stars behind it, and the sun at the bottom.

If you take a closer look, you’ll notice that the branches on the top are white, while branches at the bottom are black. This symbolizes balance in nature and shows that everything in life has its cycle. It also serves to tell you everything changes, if you are in a bad place right now, things might change.

You can see an owl at the top of the card and they are a symbol of wisdom. She seems calm and that could indicate that she understands things change over time. You have to remain patient and observe what is going on around you.

However, this card also points to the other side of a coin. If you are currently having a lot of luck, you need to understand it may not last forever. There is a saying “What goes up must go down“. That’s exactly how it is with the wheel of fortune, things change and you have to stay observant.

The second edition of The Wild Unknown Tarot Deck

The Wild Unknown also has the 2nd edition. In this edition, some cards have changed and the back of the cards looks different as well. The lovers that we just mentioned are one example. You will instantly notice how the card has a different background. The cards that got edited are feeling more alive now. We are not really sure why Kim decided to change the illustrations, but they look even better now.

It’s awesome to see that Kim decided to update the deck and didn’t force a new one. It’s probably because she has self-published the whole deck and has a love for her fans. You may see the full deck flip through at the video down below.

1. Can I use this deck for my tarot readings?

Absolutely! It is very similar to other Marseille-based tarot decks.

2. How many cards are in this deck?

Same as other tarot decks, there are 78 cards in this deck.

3. Who made The Wild Unknown Tarot Deck?

Kim Krans made this deck which turned out to be New York Times bestselling tarot deck.

4. How many editions of The Wild Unknown are there?

There are two editions. The second edition had some cards re-designed, and the back of the cards has also changed.

5. Where can I purchase The Wild Unknown deck?

The easiest way to purchase this tarot deck is through our shop.

I might be subjective, but to this day there is not another tarot deck that I feel so attracted to. Each card in The Wild Unknown Tarot Decks is simply beautiful. All of the images are hand-drawn and they are nature-inspired.

It amazes us that this tarot deck doesn’t have a big publisher name behind it. Kim Krans has designed it herself and even self-published it in earlier days. The Wild Unknown tarot deck is definitely worth it.

The cards are sturdy, high-quality, and have a matte finish to them. Even the box is sturdy and durable. 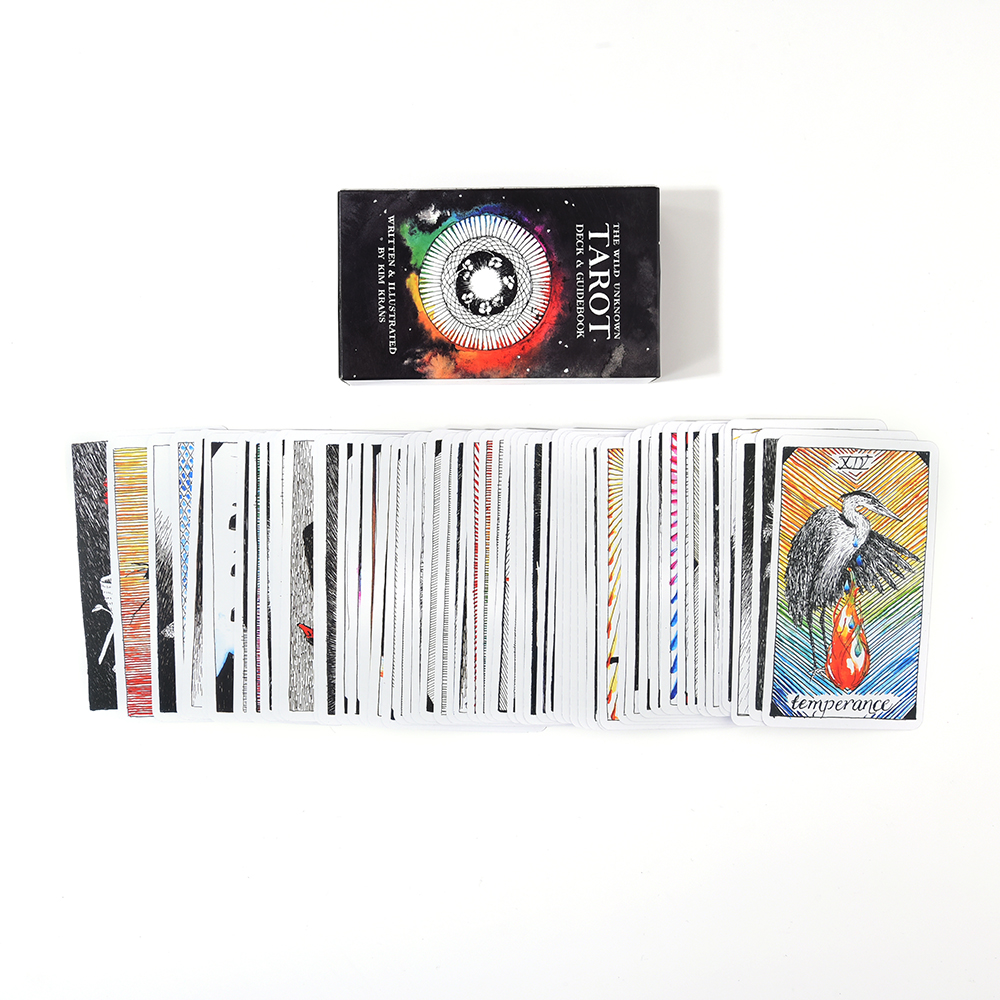 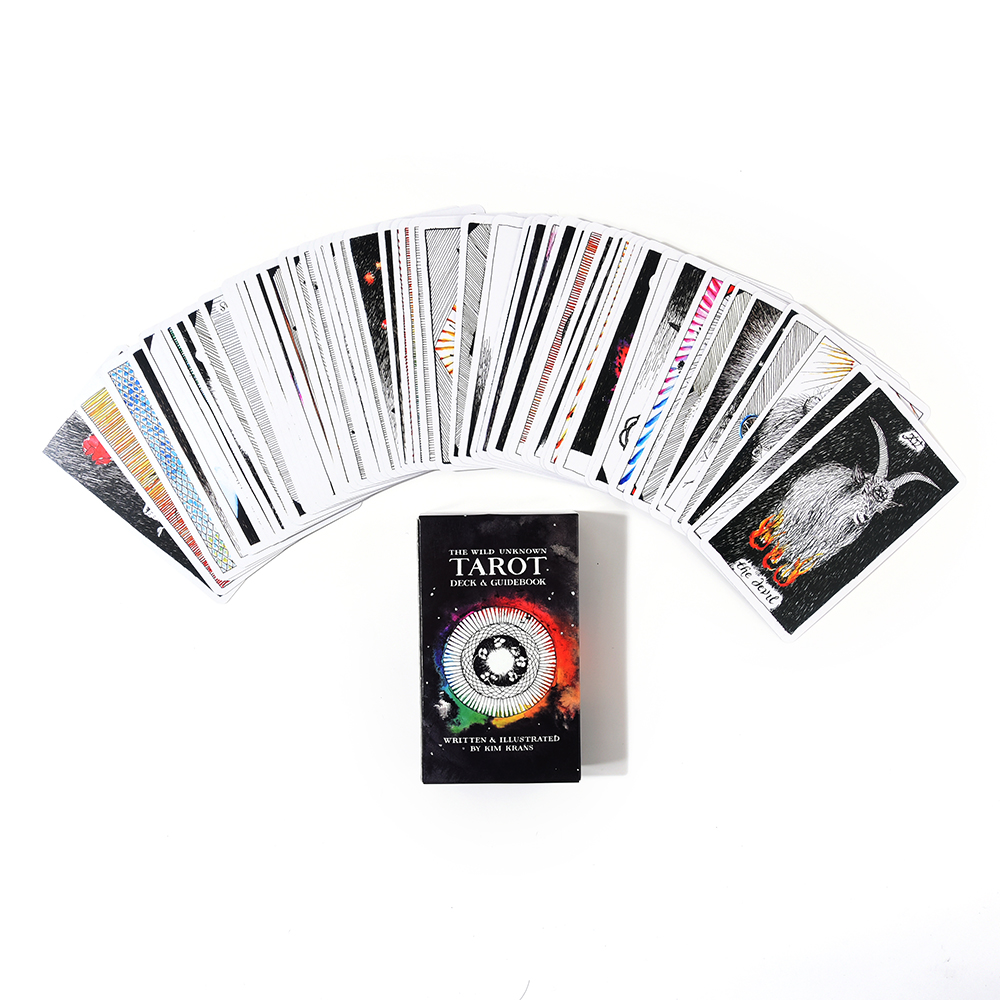 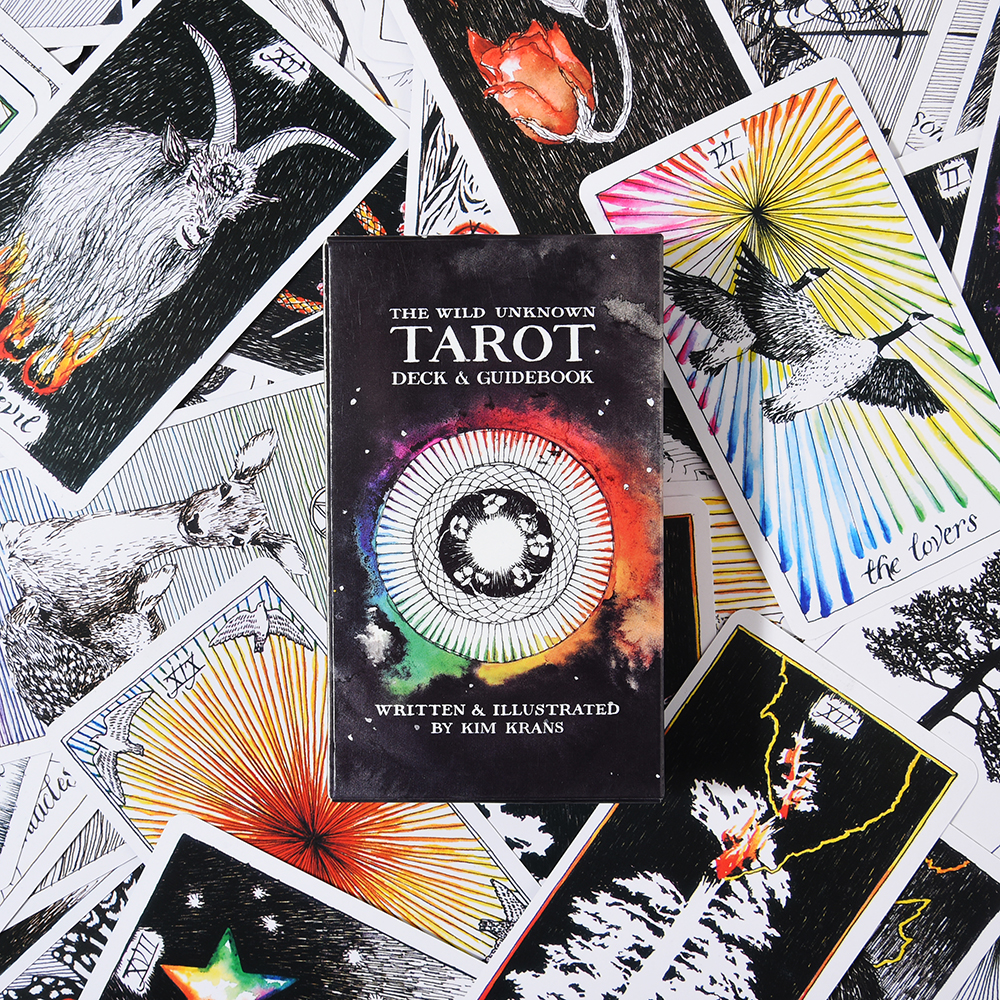