There is a perfect way to describe this tarot deck with a three-letter word: Art.
Tattoo Tarot Card Deck is a beautifully designed tarot deck with plenty of vintage tattoo motives. It’s way different than anything we’ve seen so far. You can tell that the author put a lot of time into designing each card. The lines on the illustrations are precise and clear.
The whole deck is modern and cool-looking, even the deck cover looks amazing.

Tattoo Tarot Deck is high-quality made and each card has a matte finish to it which makes the illustrations look even better. You’ll be able to shuffle the deck easily, even though the cards are made out of cardstock. That’s because cards in this deck have a smooth finish to them.

The whole deck simply feels professional. We guess that is what you get when the authors are passionate about their work.

Similar to most out there, the Tattoo Tarot deck is also based on the Marseille version of a tarot deck. There are 78 cards in a deck from which major arcana takes 22 and minor arcana is 56 cards. Each card in the tattoo tarot deck has its name written on the bottom to help you identify the card.

When you take a look at the cards they look like a re-design of some tarot deck that’s been there for ages. However, that’s not the case and this is just the style of this deck authors Diana McMahon-Collis and Oliver Munden also known as MEGAMUNDEN.

She co-founded the Tarot Association of the British Isles which explains the love for tarot. On the other hand, Oliver owns Rock Steady tattoo studio in the UK. Combine these two and you got yourself an ideal pair for a tattoo tarot card deck.

All of the images look as if you are looking at art on someone’s body. We can totally see someone using one of the cards from this deck as a tattoo on her body.

One thing we’ve noticed is how each of the four suits has a specific color to it. There are four different colors, red, green, blue, and goldish. Major Arcana cards are a mix of these four colors.

That’s a small detail but adds a cool feature to the deck. We don’t really remember seeing it anywhere else. You can see what we are talking about In the picture below, notice how each suit compares to the other.

It surprised us when we found out the tattoo tarot card deck was made in 2018. It has an art style that feels like 1600 or older. When we looked up Oliver, one of the authors, it looks like his tattoo designs have a similar style as this tarot deck.

When you go through the deck you’ll notice that most human figures in it also have a tattoo. Even though every card has a symbol detail on it for easier interpretation, we would still suggest this deck to experienced tarot readers. Also, we suggest this deck for professional tarot readers as the customers will surely love it.

It doesn’t surprise us that the tattoo tarot deck is included in almost every “must-have” list. It really has something unique to itself and feels different than other decks. Mundane and Diana have made a tarot deck that will leave its footprint for a long time.

If you are looking for tattoo inspirations, you could easily take a look into the deck and you’ll find one. All of the drawings have crisp lines and everything feels so fresh. My personal favorite card from the deck is the tower.

It may be my favorite because the drawing reminds me a lot of those old pc game designs. As you can tell from this card, there are many details involved in each card. Each line, shadow, dot, or anything drawn on the card feels just as it should.

Since this is a Marseilles-Inspired tarot deck, you’ll need to spend some time understanding what each card means. If you are wondering if you should read reversals differently with this deck, well the answer is not a yes or no. Traditionally, reversals are not read with Marseilles-inspired decks, but some people still do it. That being said, you should decide on your own if you will interpret reversals differently.

The tattoo Tarot card deck was designed and published by two authors, Oliver Munden and Diana McMahon-Collis. We have already explained how the two make a great combination for this deck. Oliver owns a tattoo studio and enjoys tarot, Diana loves tarot and obviously enjoys tattoos.

Oliver Munden is a 39-year-old artist that does illustrations, tattoos, and a bunch of other things. Most of the work he does is connected with drawing on different types of surfaces. Together with another artist Jeff Nichols, Oliver does custom guitars that look AMAZING.

He has a lot of tattoos on his body, so it’s not a surprise that he decided to make a tattoo-inspired tarot deck. You can see his style throughout the whole deck, that’s exactly why the deck feels so unique and cool. The tattoo Tarot deck is his first tarot project, let’s hope not the last because he surely has got something to say.

Diana McMahon-Collis is a true tarot lover. She has written about the tarot, astrology, spirit, health, mind, and similar other topics for over 30 years. As we previously mentioned, she has co-founded the Tarot Association of the British Isles.

She has also worked as an astrologer in the past. Nowadays, she mostly writes for The Mountain Astrologer and other astrology magazines. On top of that, she reviews tarot decks and books.

The tattoo tarot deck is not her only tarot deck. She also made a deck called movie tarot with another author, Natalie Foss.

We are glad that these two somehow found themselves together because they made one of our favorite decks. Let’s hope they will get together one more time and bring us an even better deck.

1. Who made the tattoo tarot deck?

This deck was made by Diana McMahon Collis and Oliver Munden (Also known as MEGAMUNDEN).

2. How does the deck feel in hand?

Card stock is quality made, and you can easily shuffle it because the cards have a smooth finish to them. The box has a beautifully designed as the deck itself. As with other tarot decks, the cards are slightly bigger than your usual playing cards.

3. What’s so good about this deck?

The design of the cards is absolutely magnificent. You can tell right away that these are not some random drawings, but the style of someone (the author). All of the cards have a style that looks old but has a modern touch to it.

4. Is this deck beginner-friendly?

5. How many cards are in this deck?

6. Is there any nudity in the tattoo tarot deck?

Yes, there is a small amount of nudity. You should consider that if you plan to use this deck around children. 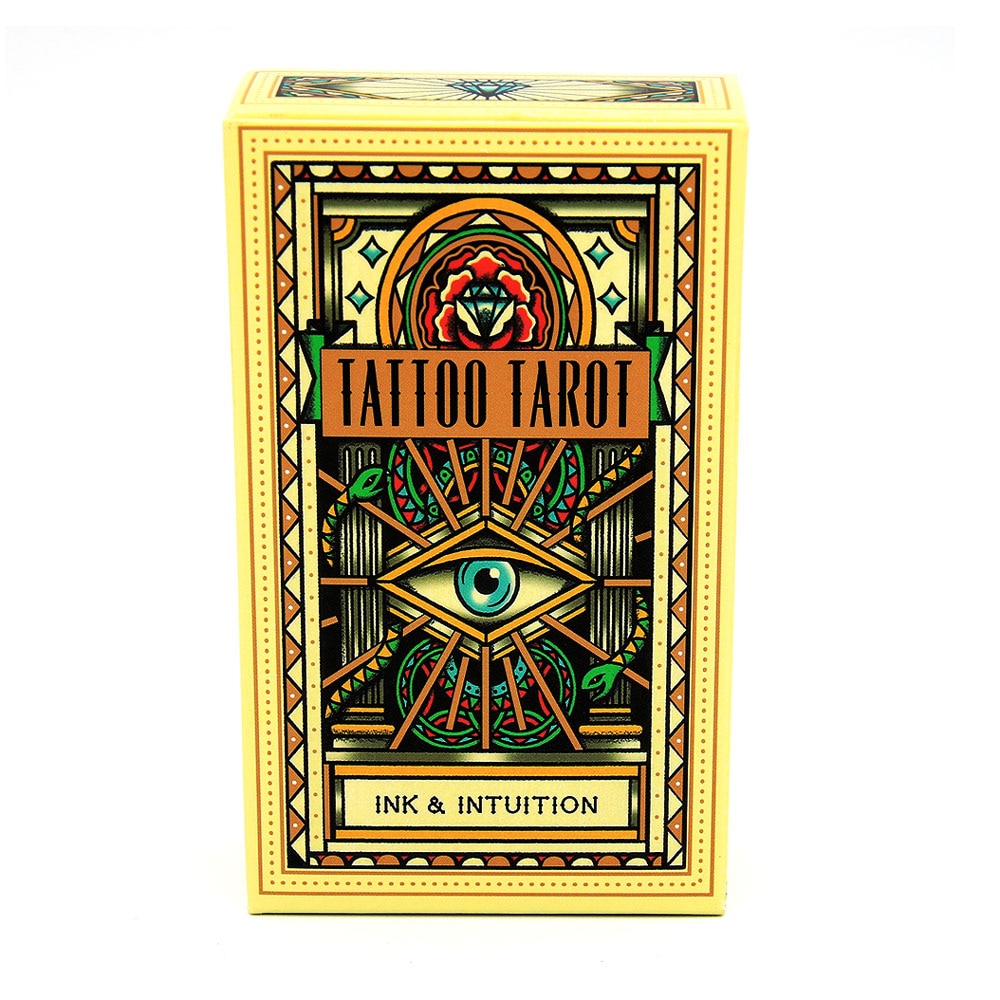 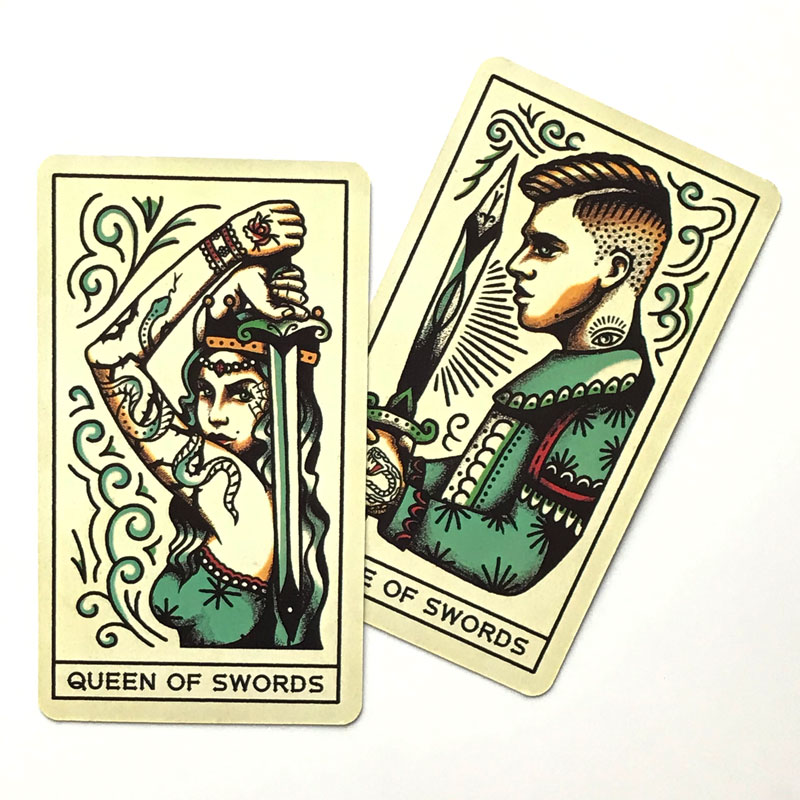 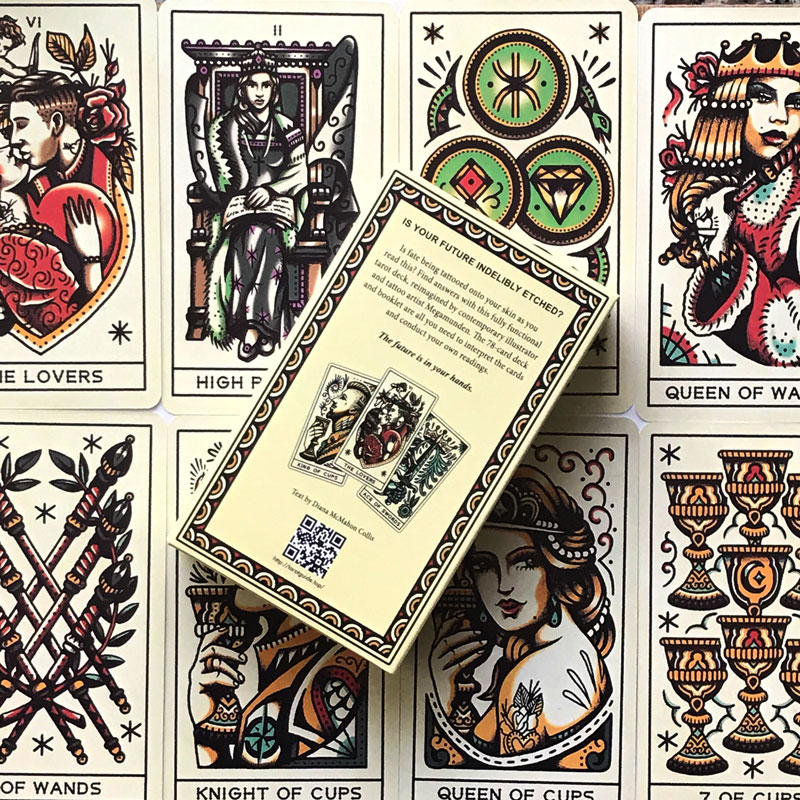 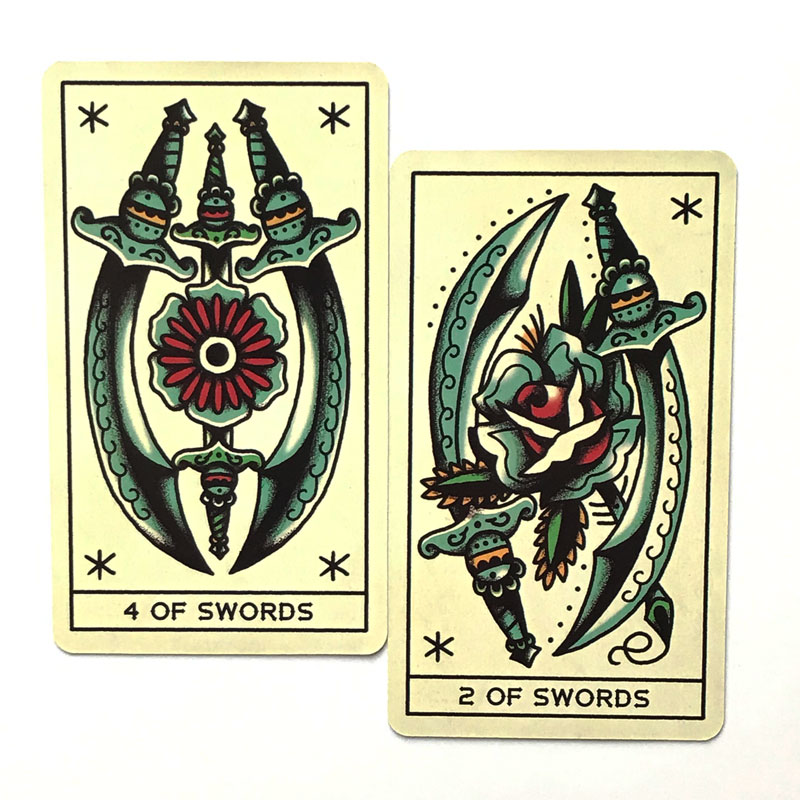 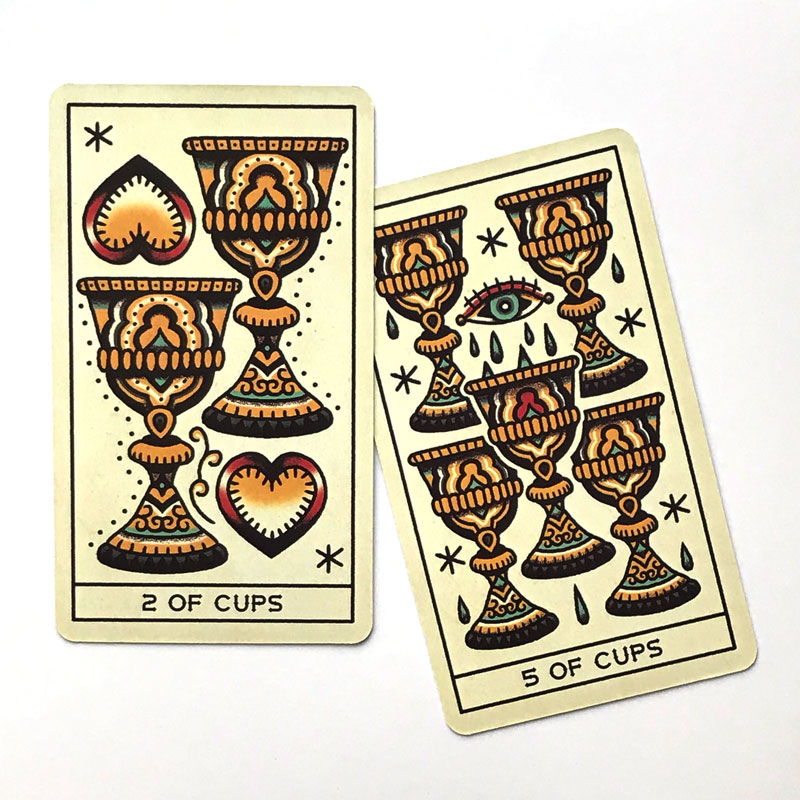 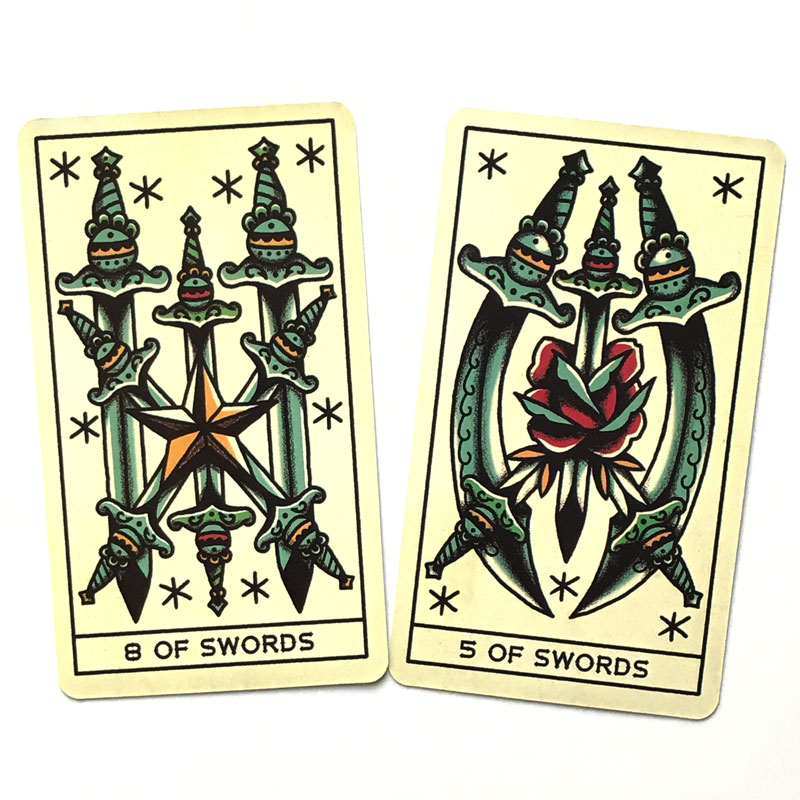 There are no reviews yet.

Be the first to review “Tattoo Tarot Deck” Cancel reply