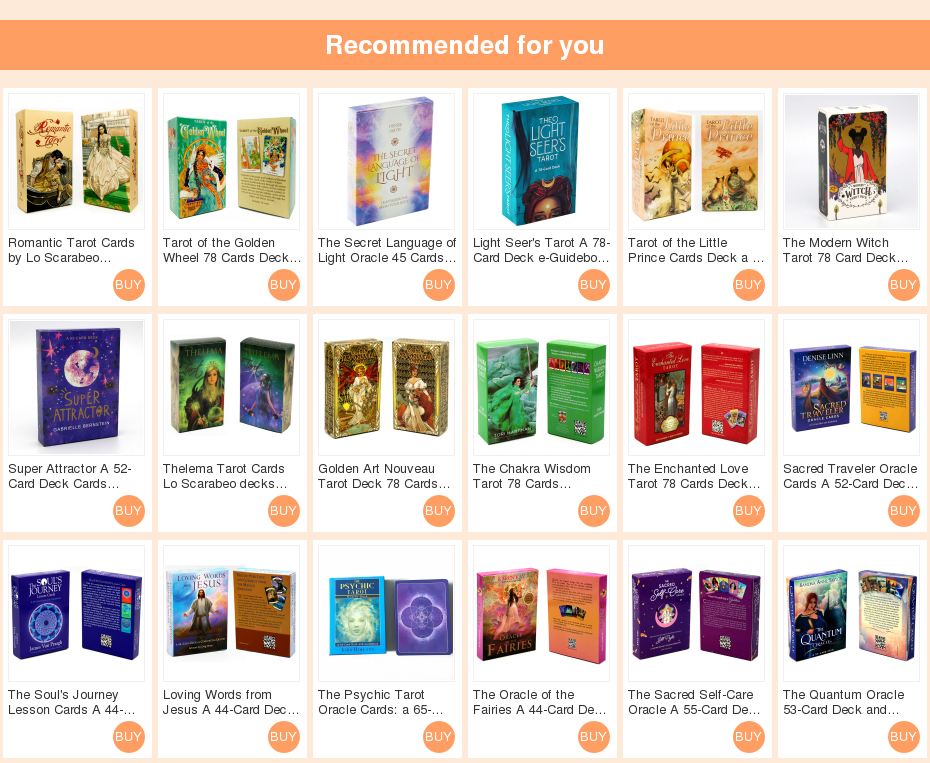 A youthful, contemporary take on traditional tarot imagery by Long Lost and Submerged illustrator Lisa Sterle.
Tarot has never looked more sophisticated and contemporary! Acclaimed illustrator Lisa Sterle marries the symbolism of the traditional Rider-Waite-Smith deck with youthful, stylish characters and items from our modern lives. With its diversity and all-female celebration of womanhood, this vibrant, fashion-forward, and colorful deck brings fun and fresh air to the tarot!

note:The instruction manual is a PDF file. Please scan the QR code on the box with your mobile phone. The instruction book can be read and downloaded online. You can also print it out. This is the reason why our products are cheap, but we mainly do a good job on the quality of the cards. , The color of the card is real, the thickness is very thick, strong and durable, and it will not be wrinkled for many times, I wish you a happy use! thankyou!

One of the most popular tarot decks that brought a whole new young generation to the tarot. Modern Witch Tarot Deck is Amazon’s #1 Best Seller in the tarot category. This deck is not even two years old but already loved by so many.

The author Lisa Sterle brought symbols of youth and refreshed the images of the Rider Waite tarot deck. Cards in this deck look vibrant and the illustrations are full of modern items such as laptops, high heels, etc.

Modern Witch Tarot Deck celebrates womanhood and it’s easy to notice how ‘The Hierophant’ and some other cards are portrayed by females. It’s fun to see how women have replaced male roles in this deck. This makes the deck really stand out as it’s quite different than what we are used to.

As previously mentioned, Modern Witch Tarot Deck can be seen as a rework of the Rider Waite Tarot deck. Most of the images feature the same elements, but Lisa’s rework made them modern and fresh.

On the picture down below you may see the ‘The Magician’ card. The left image comes from the Modern Witch tarot deck and the right comes from the Rider Waite deck.

You can easily notice how they look almost exactly the same, but on the left image is a woman instead. The same goes for other cards that were previously represented by males in the Rider Waite deck. Also, you can see how the young women in the image is wearing modern fashion items.

This was the idea behind this deck, make the images modern, celebrate womanhood, and adapt it to today’s audience. Let us say that Lisa hit the nail on the head with this one.

The author basically resurrected a great deck and made it even better. Modern Witch Tarot Deck is an ideal beginner tarot deck. Each card has a roman number on the top and the name at the bottom.

One detail that we love is how in some images classic tarot symbols got replaced by today’s things. Such an example is ‘The Chariot’ card where the horse got replaced by a motorcycle.

Considering there are so many ‘dark’ themed tarot decks published, this one comes as a refreshment. All of the illustrations remind us of pop art while the colors are both vibrant and pastel, however strange that sounds. If you have read Lisa’s comics, you’ll recognize her art style right away.

As we previously mentioned, there are many modern symbols in this deck. That’s a good reminder to us that the world will change from the outside, but its core values remain the same.

Tarot cards are a good representative of it, they look different, but they carry the same meaning. At the end of the day, you are the one who has got to interpret them. Some cards can have a totally different meaning for you compared to your friend.

That’s the beauty of different tarot cards, you got to ‘feel’ the deck in order to get the most out of it. Modern Witch Tarot deck will certainly help with the connection since it has a lot of symbols from our daily lives. Take for example the high priestess card down below.

Right away you can notice the woman on this card has a laptop in her lap and she wears high heels. What’s a better way to modernize the classic tarot illustration than this? Details like these are most likely the reason why so many people feel an instant connection to this tarot deck.

What we didn’t mention is how quality this deck is. The box is very sturdy, and the cards are thick. You’ll instantly feel they are high-quality, although they are a bit harder to shuffle because of that.

One of the cards has a woman with tattoos on her arms and it’s amazing to see all the details the author came up with. You might also notice how on some cards such as ‘The Devil’ people are turned to the opposite side compared to the original Rider Waite tarot deck.

What’s the reason behind this? That’s up to you to interpret 🙂

1. How many cards are in the Modern Witch Tarot Deck?

As with many other tarot decks, the modern witch tarot deck also has 78 cards in it. The Major Arcana has 22 cards and the Minor Arcana has 57 cards.

2. How many editions are there?

There is only one edition of this deck. We do not know if the author is planning to make another one.

3. Who is the author of the Modern Witch Tarot Deck?

Lisa Sterle is the author of the modern Witch Tarot Deck, while Vita Ayala has written the foreword.

4. What inspired the author to create this deck?

In an interview, the author (Lisa) said she made one tarot card for fun, and after she has seen the good feedback, she started making more. Eventually, she designed a whole deck which is nowadays known as the modern witch tarot deck.

5. Is this a good beginner deck?

Absolutely! This deck has a number on each card and the title written on the bottom. This is ideal if you don’t yet know what each card represents.

Lisa Sterle is an artist from Columbus best known by Modern Witch Tarot and various comics such as Dead Beats, Submerged, and more.

She has published Modern Witch Tarot Deck on 11/05/2019. Since then, this deck has over 10.000 ratings on Amazon with 5 stars average. It’s crazy to see how her only tarot deck became the best-selling tarot deck in two years.

In an interview for Liminal11 Lisa said that her inspiration to design a tarot deck came when she designed the ‘Ten of swords’ card. That started the domino effect, and one card by one she made the whole deck.

When asked about the inspiration for fashion in the deck, Lisa said: “I really enjoy drawing fashion, so I knew at the very least I wanted the figures in each card wearing modern clothing.”

Also, she answered why it was Rider Waite that she decided to rework: “I also love the compositions of the Rider-Waite-Smith so much. It’s so classical and iconic.”

The Modern Witch Tarot deck is an awesome and relatively new deck on the market. It is loved by many which can be seen by the ratings on places like Amazon. It’s the #1 Bestseller on Amazon which is alone good proof of how popular this deck is.

There are so many colorful images and details on cards in this deck that’s impossible to not like it. Positive vibes are surrounding this deck, something that cannot be explained but rather felt. High heels boots, suits, leather jackets, and sundresses are just some of the clothing items present in this deck which really makes it stand out.

It is a great upgrade to the classic Rider Waiter tarot deck with all the modern symbols. It’s rare to see laptops and motorcycles in a tarot deck, but Lisa has made it possible. If you are a beginner in tarot, you will love this deck as every card is numbered and titled. 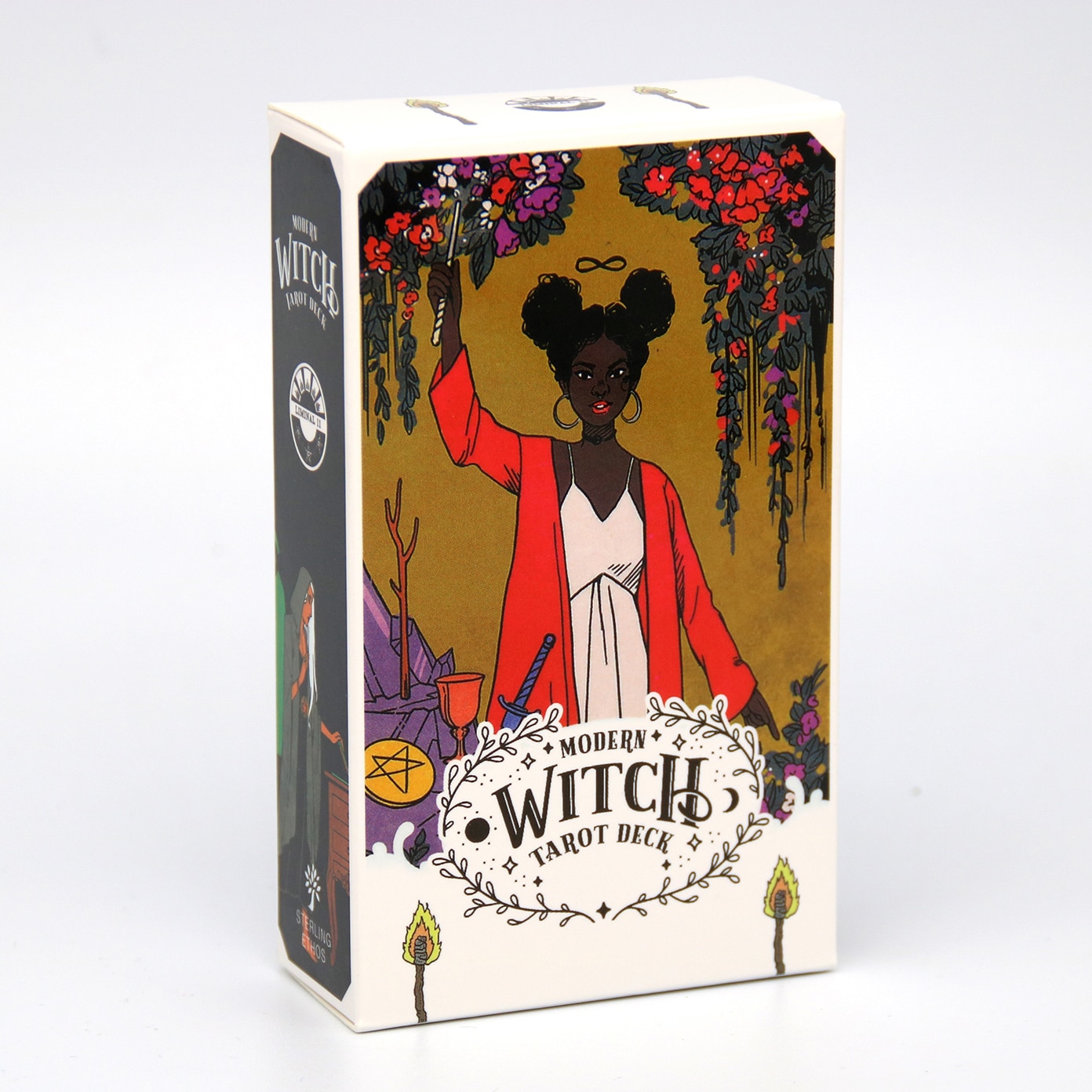 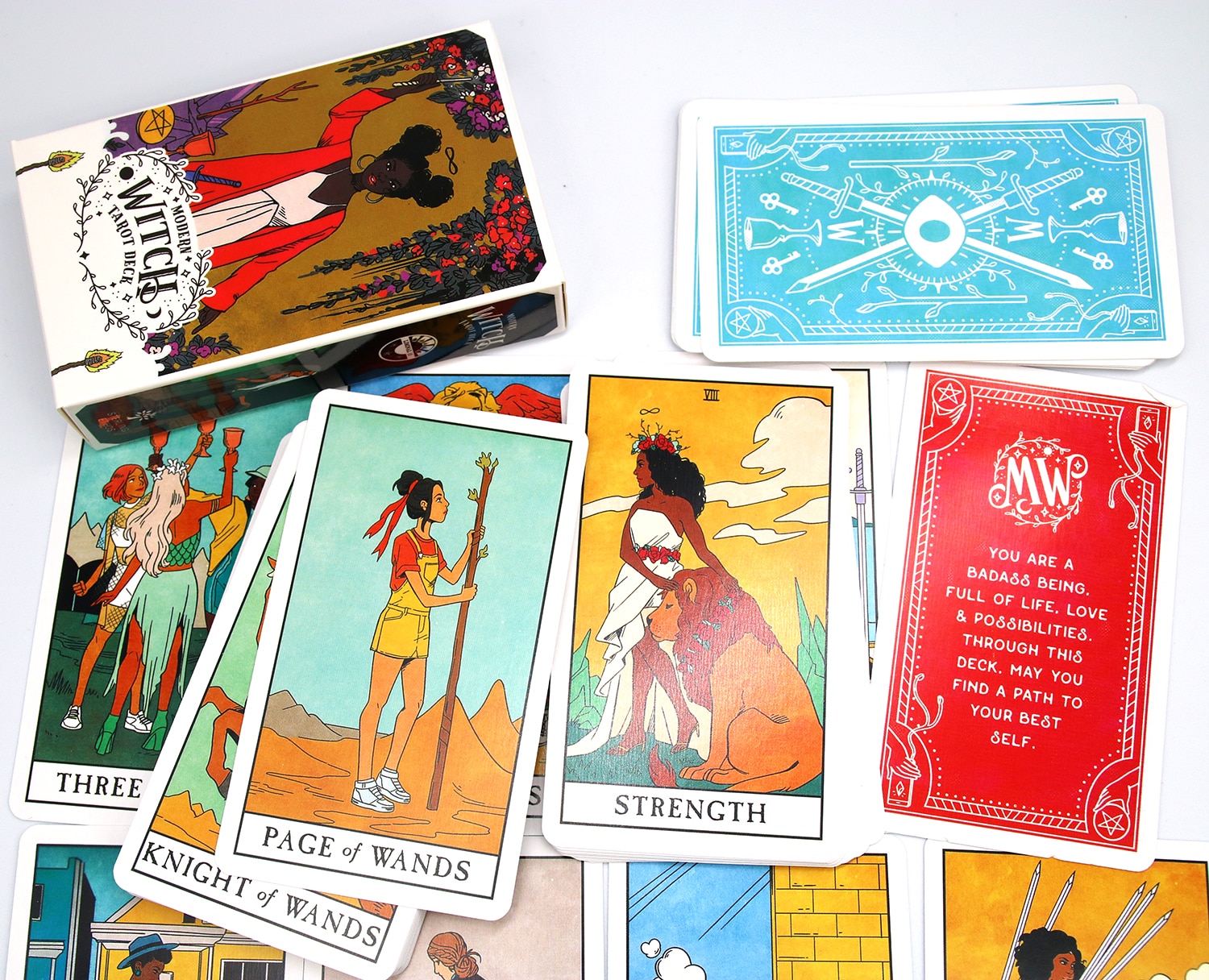 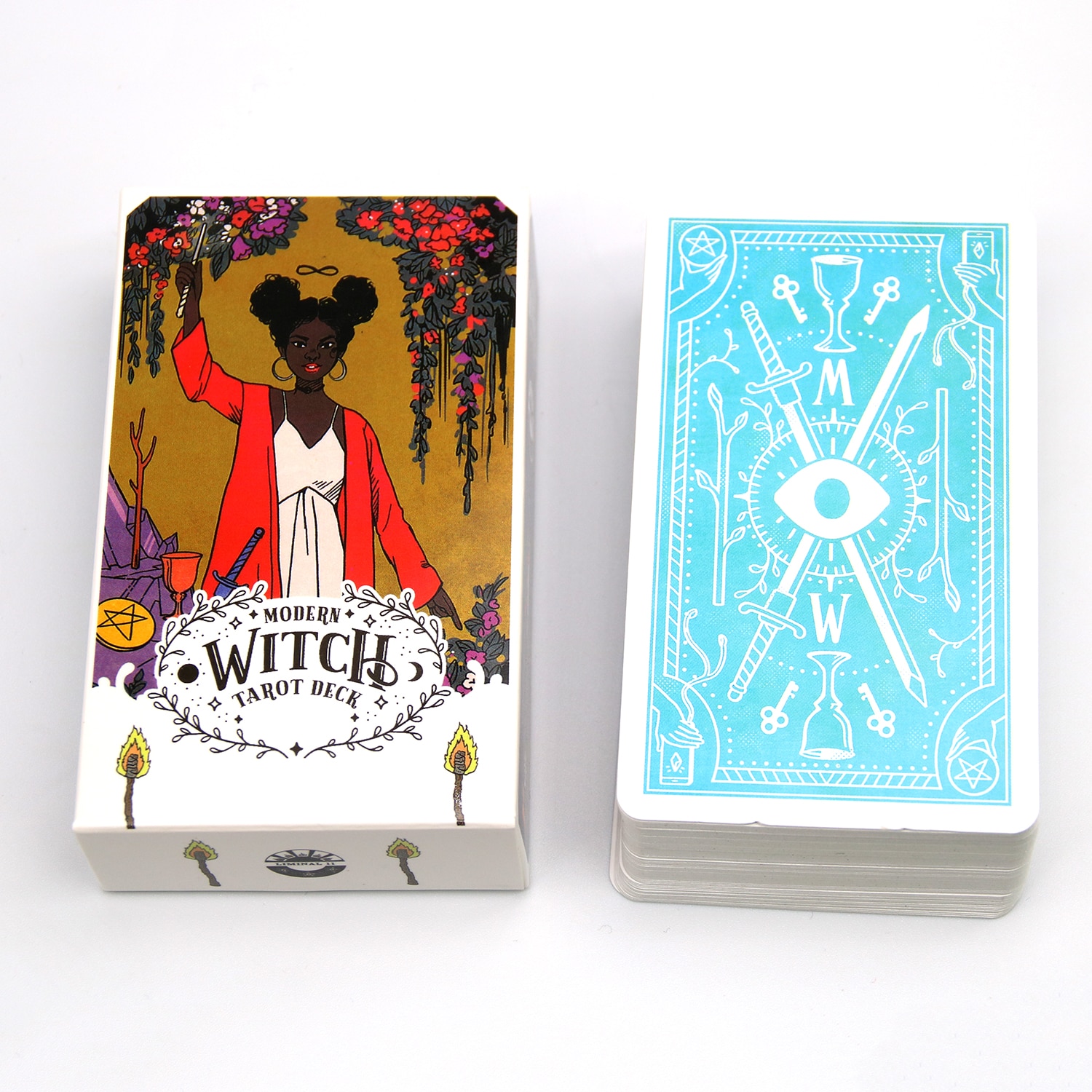 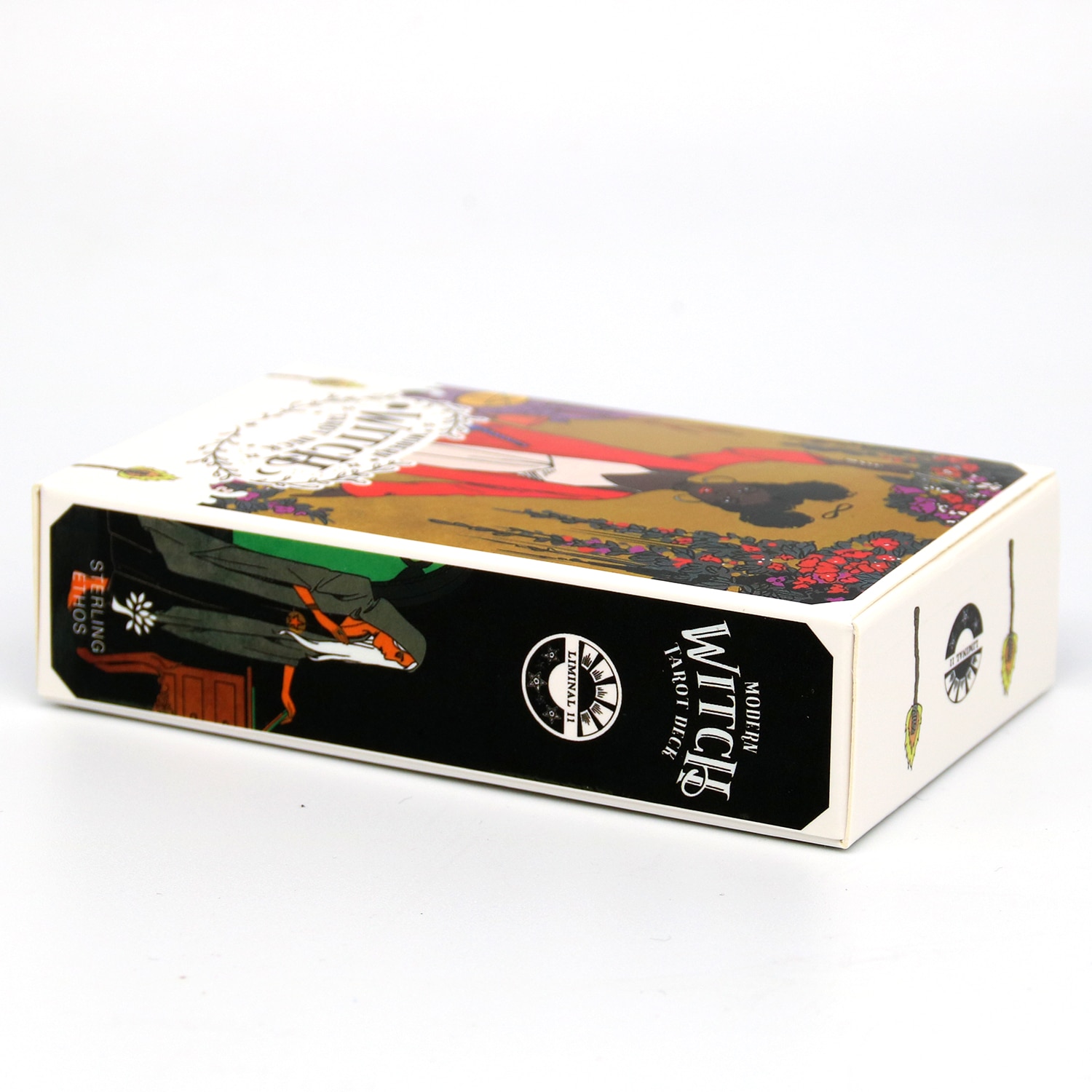 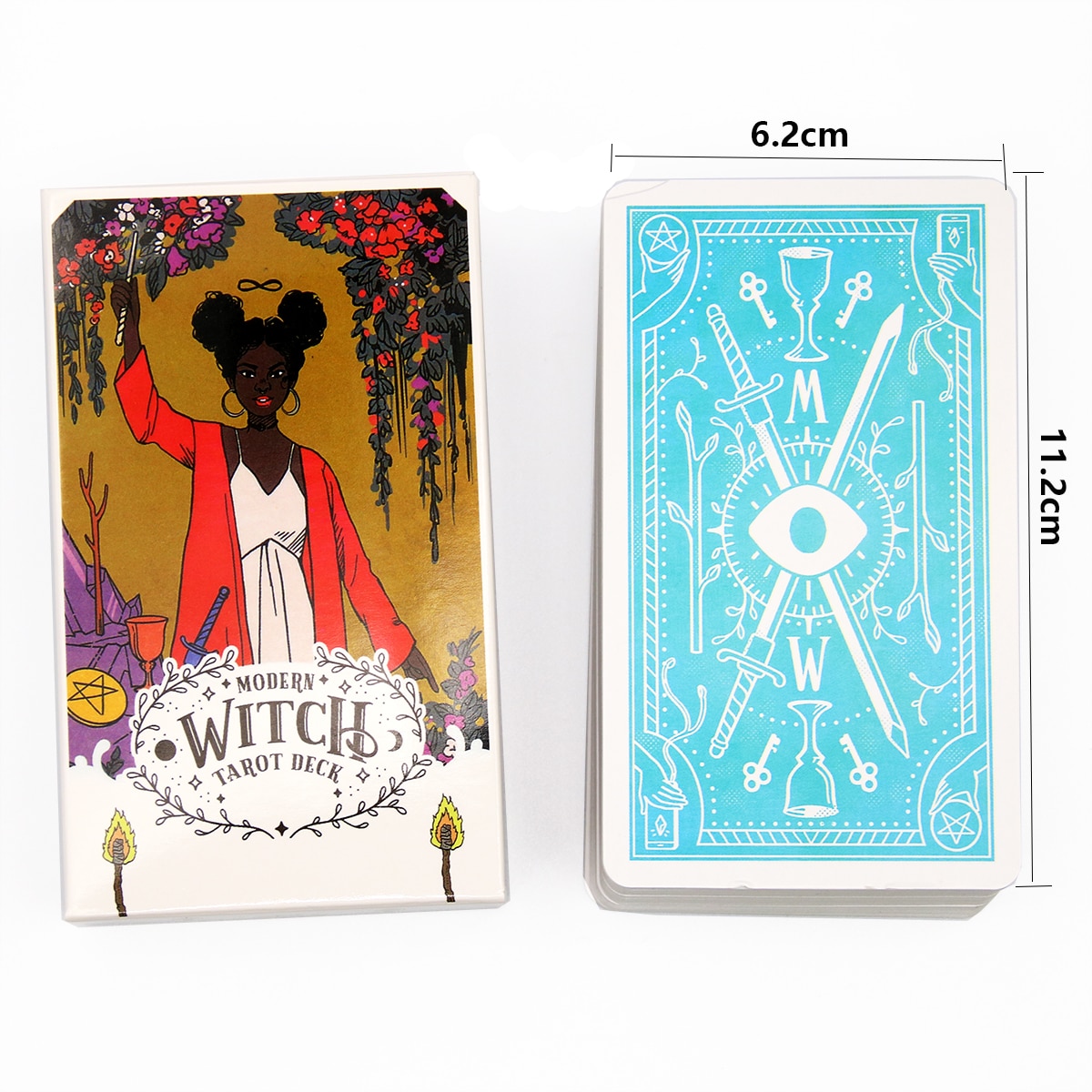 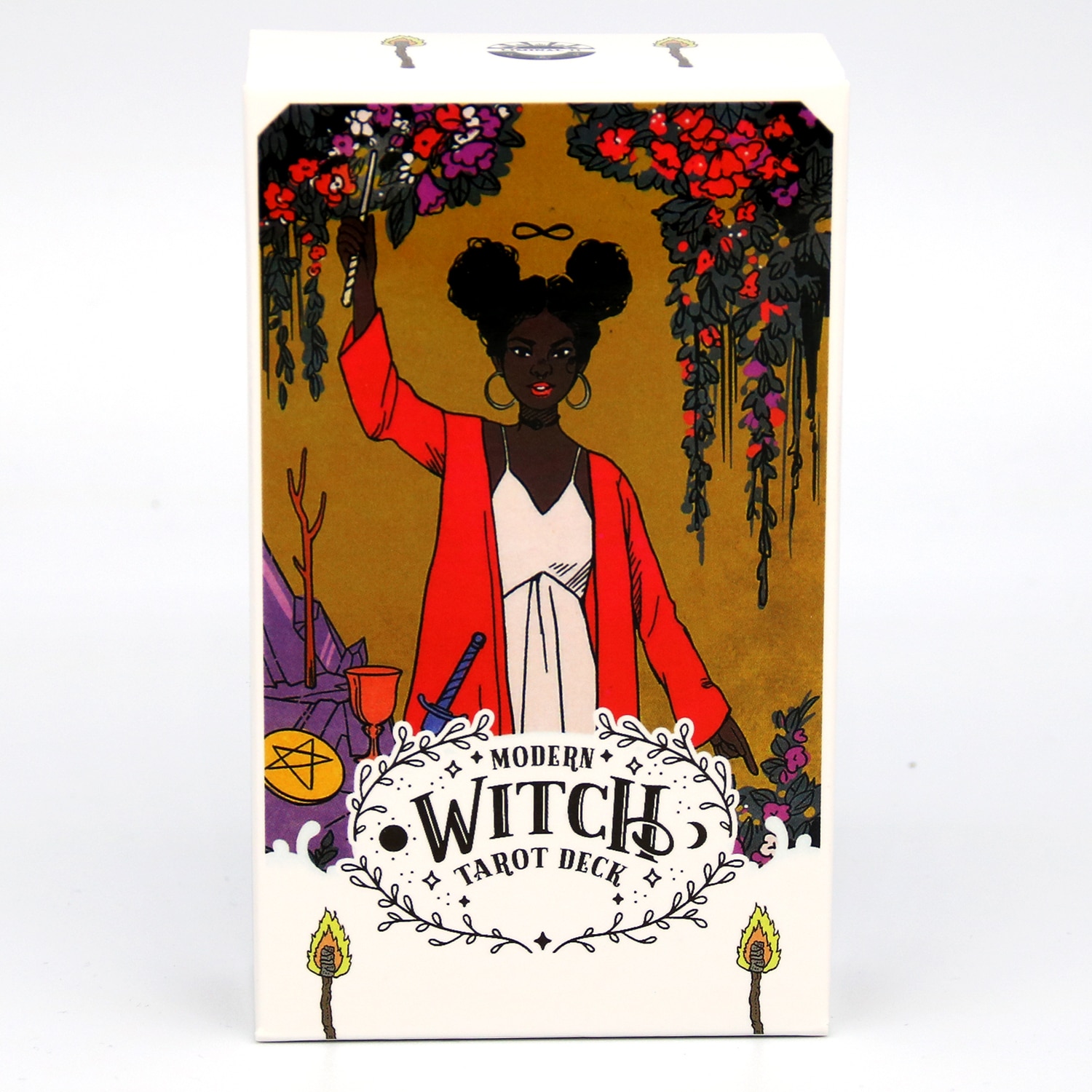 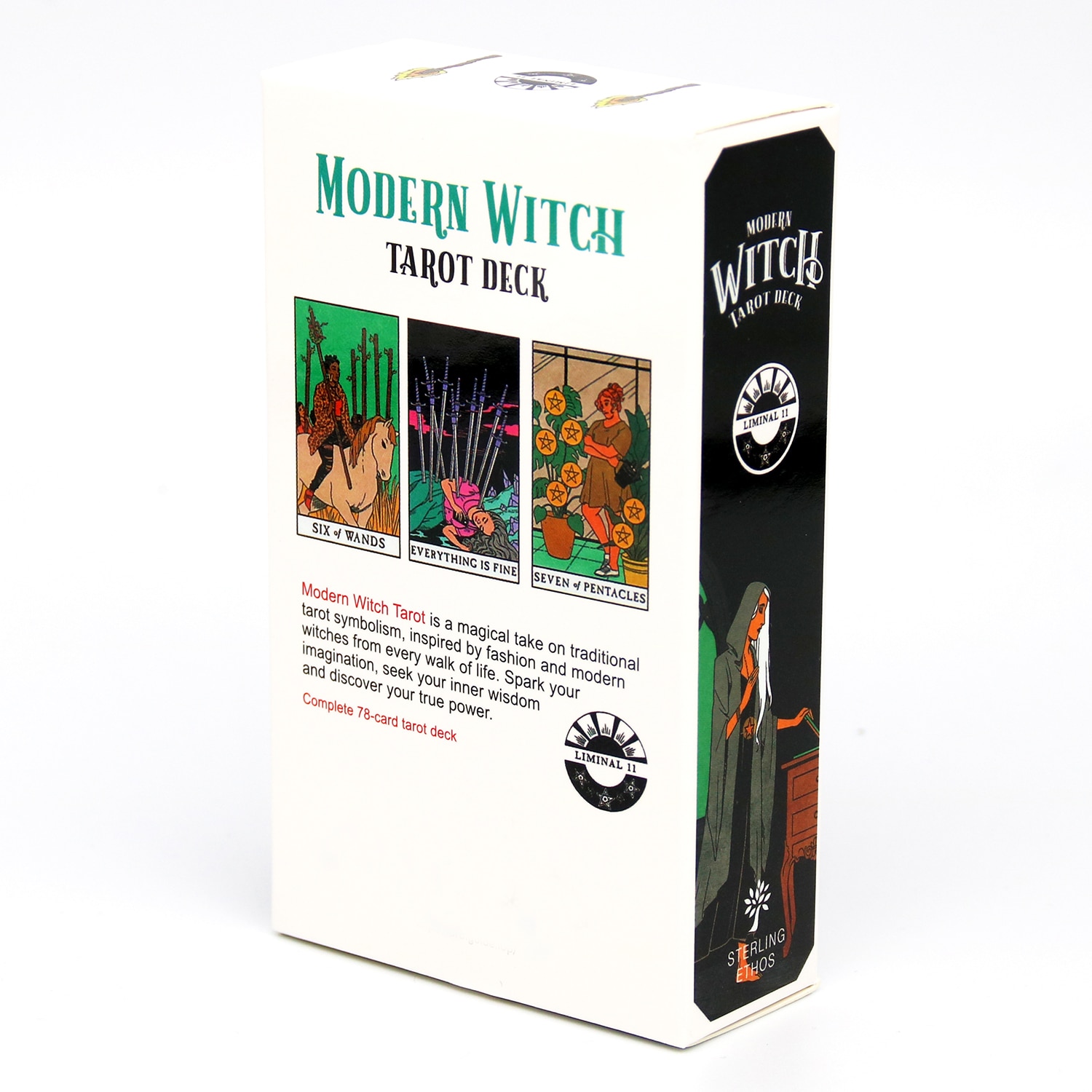 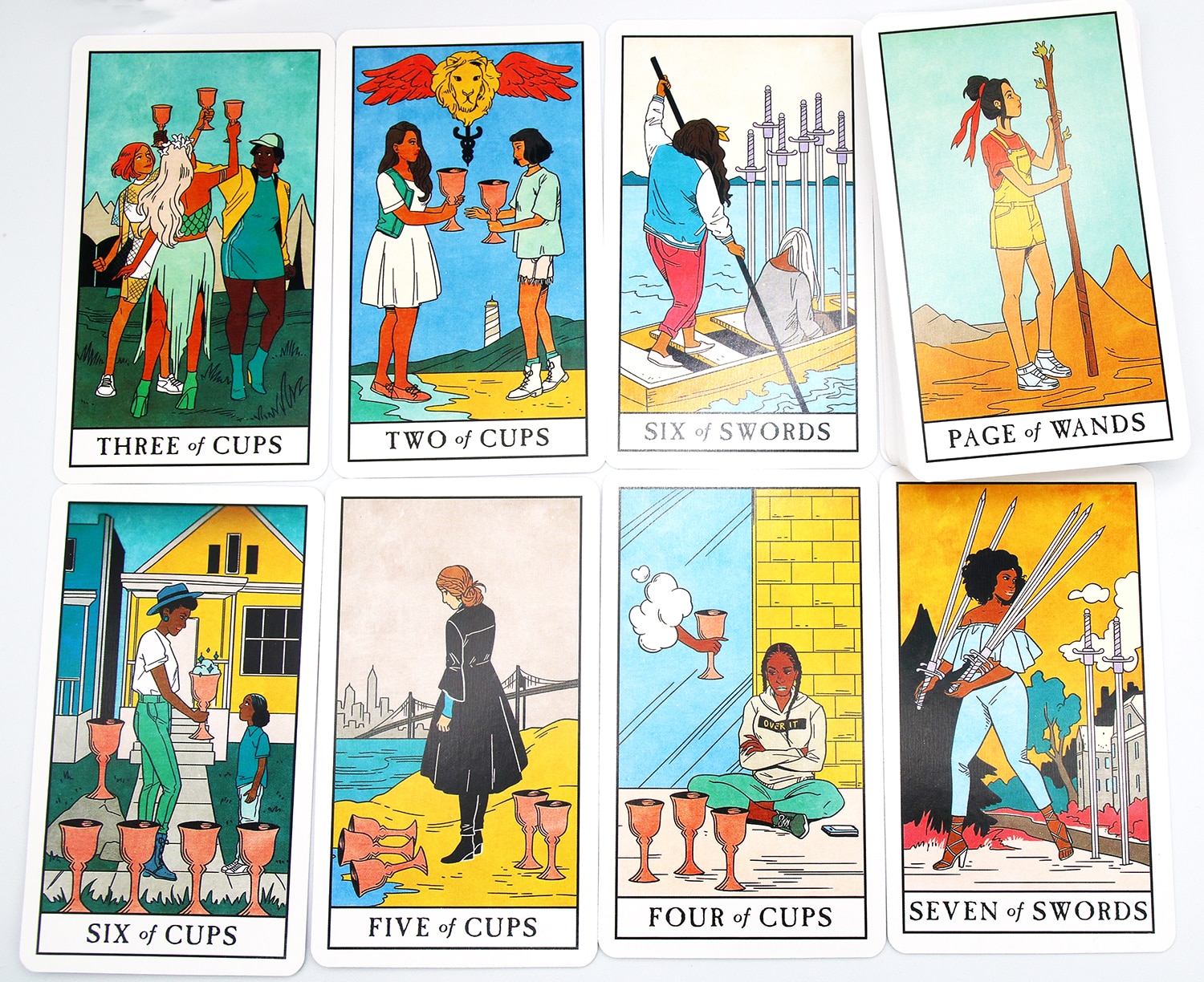 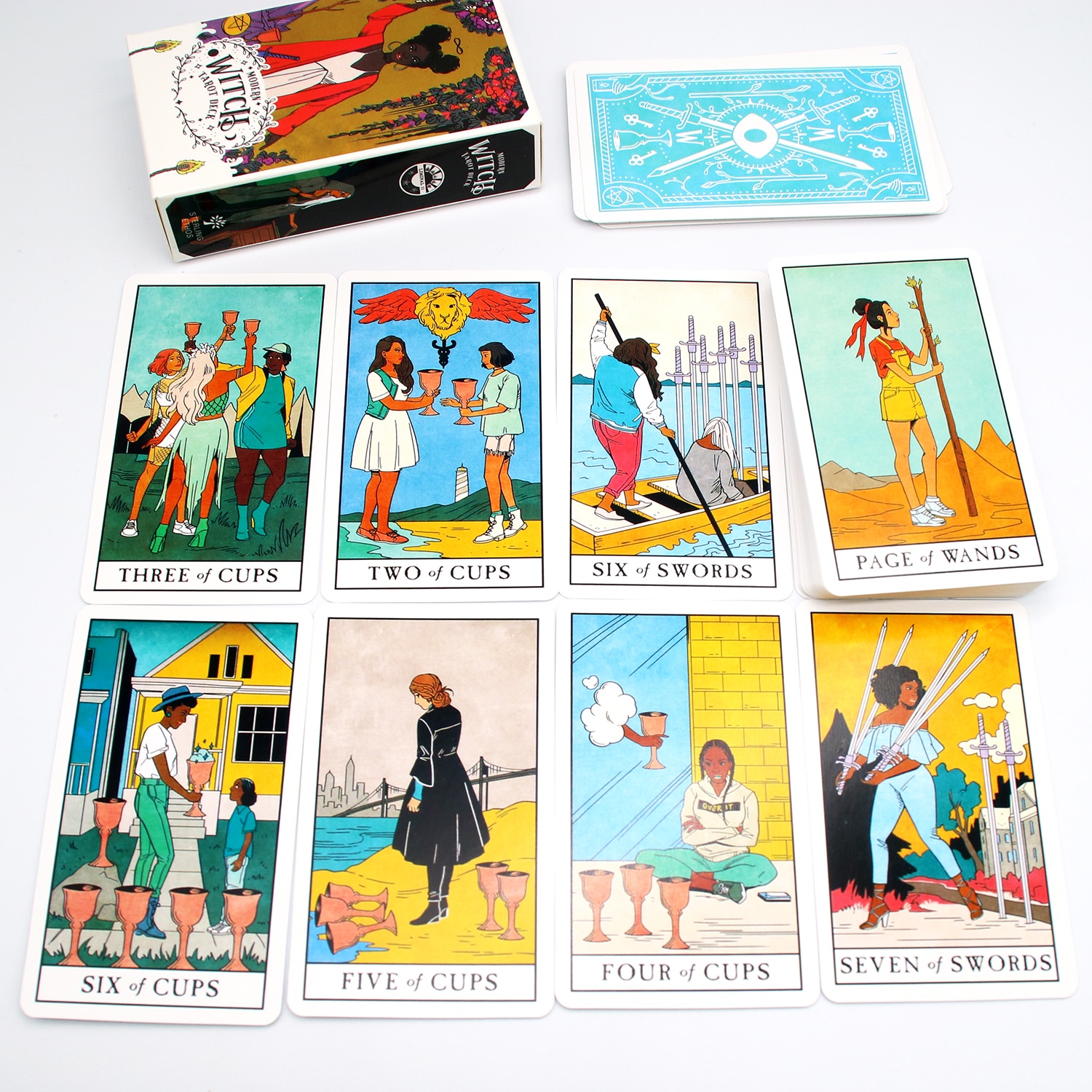 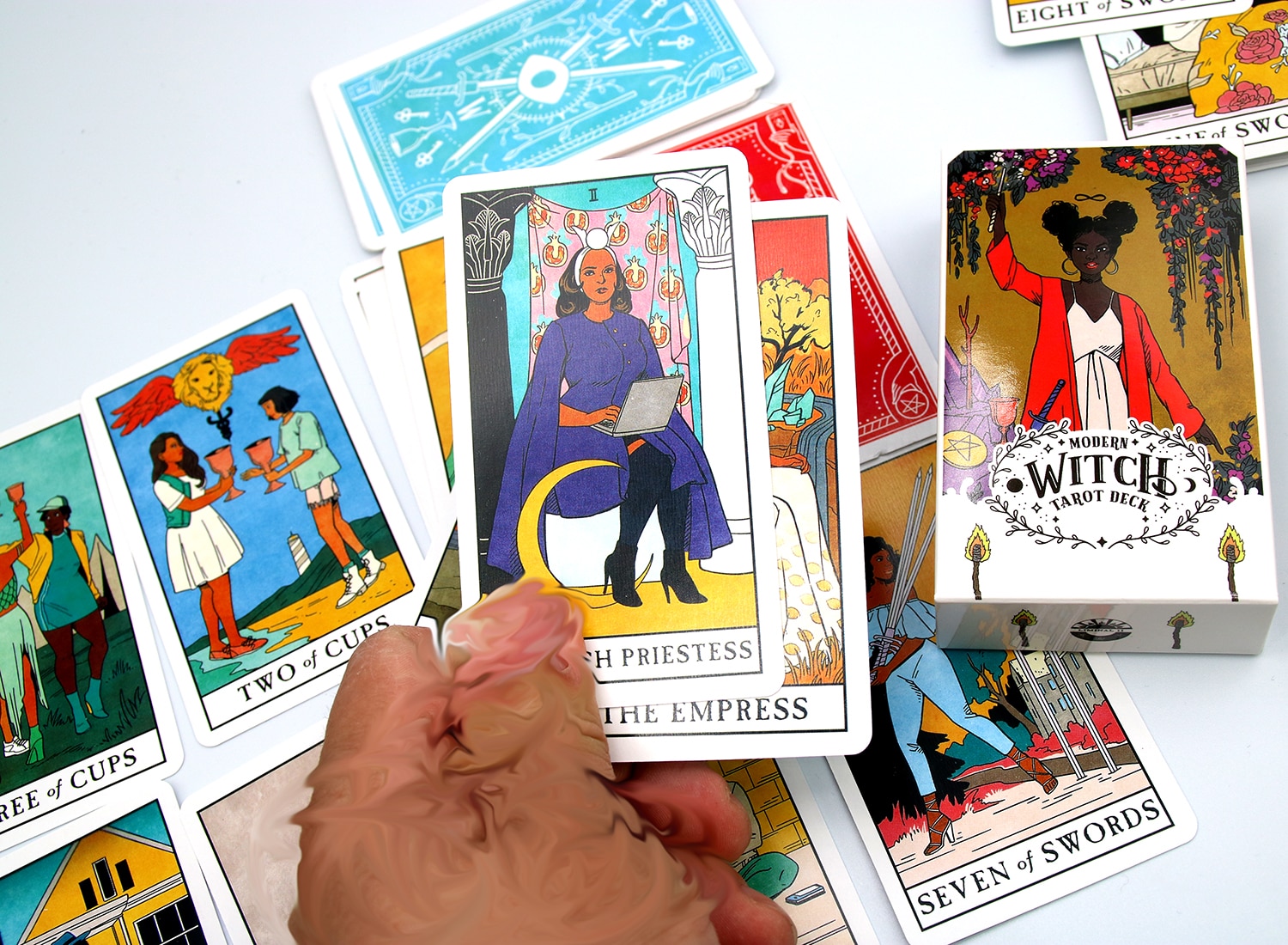